Being honest about, I think this book is probably ‘my contribution’ to the world, and I was thrilled when Holly Roberts, current paperbacks supreme at Bloomsbury, agreed almost immediately, from a cold call I made in the early weeks of 2006, to revamp, republish and repromote the book. Alongside a new foreword by the legendary Johnny Marr (thanks Johnny!), Holly suggested I prepare the mother of all Jansch discographies as an appendix and I also jumped at the opportunity to rewrite and update the Author Note, the end of the Epilogue, the Acknowledgements and a slightly inaccurate footnote about Stan Kelly… 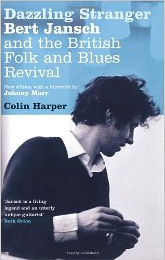 Beth Orton, despite being in the middle of a whirlwind of PR obligations surrounding her new album, took time to skim through the original edition and provide a wonderful quote for the cover, and Will Webb, a Bloomsbury designer and Bert fan, visited photography maestro Brian Shuel and found a fabulous, little-known shot of Bert taken at the 1963 recording sessions for what became Decca’s Edinburgh Folk Festival LPs to use on a beautifully designed new cover, a kind of homage in its choice of font and colouring to Brian’s now iconic design for Bert’s first album in 1965. I was touched to receive an 8 x 10 print of the picture in question from Brian a few weeks after Will’s visit, and a note which read: ‘Dear Colin – You have always said you liked this picture and I have always said it was no good. Well, that was because I had a crap print of it. Will Webb and Photoshop have convinced me!’

Without wanting to be negative about the team at Bloomsbury who worked on the book’s preparation and promotion in 2000-2001, I was always a bit disappointed that the 2001 paperback never really seemed to get off the ground after such a positive reaction to the hardback from reviewers and purchasers. This time around, in 2006, I sense that the people I’m dealing with at Bloomsbury – Holly, Will and the PR team – are genuinely interested in the book and understand what it’s about. I’m very grateful to them. A book like this will never generate a fraction of JK Rowling’s sales figures – though I’m lucky she doesn’t have a book out this year! – but it is what it is, and all one can ask is that it’s out there and available. And now, again, it is: terrific!

In this section of the site you can see the new Author Note to the 2006 edition of Dazzling Stranger, plus a second appendix, on Bert’s international TV appearances, which was prepared for the new edition but not used for (perfectly understandable!) reasons of page count-versus-cover price. I’ve also dug up some review quotes relating to the original edition of the book, along with a Q&A with me by Peter Doggett – former editor of Record Collector and a really superb writer and master of many genres – which appeared in The Journal, a short-lived publication on music books produced by the excellent Helter Skelter bookshop (sadly no more) and publishing house (ongoing). I’m grateful to both Peter and Sean at Helter Skelter for permission to reprint it here